«Zolushok» and other unexpected translations of the names of foreign films 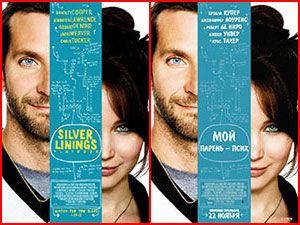 «Great movie, be sure to see!» — Unanimously declare my friends, looking at the cinema «My boyfriend — crazy.» I’m thinking like a man who in what-what, and that’s a good movie understands exactly meticulously bigwig nose, because the movie with the same name really does not aspire to the role of my favorite. Most smacked of cheap another American comedy. But deciding that friends not bad advice, I still zaguglit his and my surprise there was no limit, as in the original film called «Silver Linings Playbook». There is a wonderful English idiom Every cloud has a silver lining (lit.. Every cloud has a silver lining), which can be interpreted as a «blessing in disguise». Another silver lining is often translated as a «ray of hope». As of the «Collection of a ray of hope» in the Russian-speaking interpreters to get «My boyfriend — crazy», history is silent.

This example is, of course, one of those that can not be explained rationally. Quite often the reason for a radical change in name of the film is the fact that it can not be translated literally. The point is simply lost. For example, the transformation of «The full Monty» (lit.. «Total») in «The Full Monty» in Russian is quite logical, because the film tells the story of steelworkers who have decided to earn strip to the music, while not having any dance skills or perfect bodies. And even the Chinese translation «Six naked pigs» in this situation can be justified. But as the movie «Willy Wonka & the Chocolate Factory» («Willy Wonka and the Chocolate Factory») in the translation into Danish could become «a boy who drowned in chocolate sauce,» given the fact that the plot of Augustus, which fell into the chocolate river, really did not sink in it?

Byword is a translation of the title of the famous all-time favorite (favorite) virtually the entire male population of «Die Hard». Russian interpreters decided that the literal translation of «Die fighting» will not reveal the essence of the film. The first Soviet illegal copy of the film was published under the title «Die hard, but with dignity.» There is also a version of translation titled «Indestructible». And in the Soviet rental movie came out already proudly bearing the name «Die Hard.» But I, as a child, it was not clear why the film with a funny name riveted to the screen all adults and serious uncles.

But Russian translators did a fine job with the translation «Die Hard». While their German colleagues want the hero Bruce Willis «Die slowly», the Finns declared that the terrorists will win only «Over my dead body,» and the Poles and the Spaniards focused on the building in which the action of the film, and transferred the title as «The Glass Western «and» Crystal jungle. » 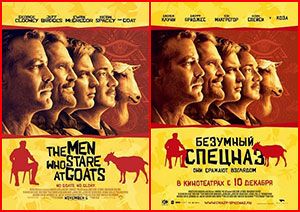 An example of a good adaptation of the film has become a name known to all motion picture «Some like it hot», translated as «Some Like It Hot.» You can only agree, because literally, «Some Like It Hot» was not entirely clear Russian audience. But thanks to translators is clear. You can not say about the film «The Men Who Stare at Goats» («Men looking at goats»), which is translated as «Stare at Goats.» Legend has it that in unsuccessful attempts to translate the name of distributors and they became fools, and interpreters, and a poor performer starring — George Clooney, who called 14 times per night. As a result, we were named «Stare at Goats» with the explanation «they fought eyes.»

It happens that the name becomes a brief retelling of the film. For example, the translation of the name of the movie «Hitch» with Will Smith in the title role of the interpreters decided to open up a little story, a movie called «Rules of removal: Hitch.» By the same rule probably translated the name of the comedy «The Hangover» («The Hangover») — «The Hangover.» Some translations are automatically exhaust the question: «And what is this film?» That is, for example, «Dan in real life» («Dan in Real Life») — «Dan In Real Life.»

Sometimes the translation does require work and a preliminary examination of the facts, as is the case with the movie «Cinderella Man» (lit.. «Zolushok,» «Cinderella Man,»). Zolushok — the nickname of the famous boxer James Braddock, about which is told in the film. He managed quite quickly to become a successful boxer, with no money, no connections. From rags to riches, as they say. Therefore Zolushok. But it is unlikely you would go to the movie with the same name, not knowing what it meant. That translators and decided to adapt the name for the audience — «Cinderella Man.» 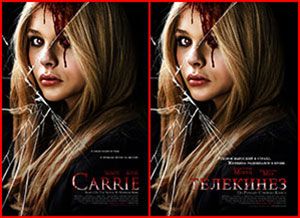 With Alabama is clear. But why did it took to distributors rename all known screen version of Stephen King’s «Carrie» («Carrie») in «Telekinesis»?

Worse, if you are already in the title of the film contains spoilers (like in this part of the article). Consider the latest to date picture of the James Bond film «Skyfall». The name should be entered spectators astray: «And what is this very Skayfoll — code mission diminutive nickname of Daniel Craig?» In Russia decided to announce that it is a certain place, transferring the title as «007: Coordinates» Skayfoll. »

But it’s flowers. Some translators manage to reveal the ending of the film, only moving his name. Chinese translated «The Sixth Sense» («The Sixth Sense») as the «He — a ghost», while the French have turned «The Shawshank Redemption» in «Those who have escaped.» The Portuguese took the palm, the most «chewed» one of the most exciting horror classic Hitchcock’s «Psycho» (lit.. «Psycho») as «the man who killed his mother.» Caring for the audience — primarily suddenly he will not guess what it was.

Sometimes it is absolutely unclear what guided by experts in translating names. Quentin Tarantino’s «Death Proof» (lit.. «Smerteustoychivost») adapted as «Death Proof», although in the film talking about the car of the protagonist, which is the «smertestoykoy.» Affected by negligent translators and touching picture about love autistic «Mozart and the Whale» («Mozart and the Whale»), «Crazy Love.» 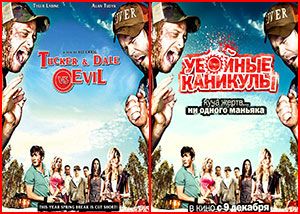 Because of the kind of translation of the title, many people had almost passed the good in the genre of comedy with elements of horror «Tucker & Dale vs Evil» («Tucker and Dale are fighting against evil»). In the Russian hire, he was named «Tucker & Dale vs. Evil». In fairness, the company of young guys really on vacation. But the film is not about that.

Another horror film called «Army of Darkness» (lit.. «Army of Darkness» in the Russian version of «The Evil Dead») was unlucky when translated into Japanese. Well-known film was «Captain Supermarket». Obviously, based on the fact that the protagonist Ash worked in a supermarket. Picture «Annie Hall» («Annie Hall») of the famous director, Woody Allen, translated for the German market as a «city neurotic». Not a bad choice, given that the major role played by himself, Mr. Allen.

Summing up, I want to say that the film — it is first and foremost an art. Quality films tend to charge so important for us, positive emotions. Well, when they are available to us in the original. But, choosing what to see, read the names in English. Otherwise, you run the risk to miss a decent movie.