In Proceedings By Natalia  1764

We write business emails in English with no errors

The benefits of e-mails

There are a lot of advantages: first of all emails to save time and give the opportunity for informal communication. They can be used both inside the company and in an effective and fast way of communicating with people around the world. Especially this method is useful for short messages, information transfer, to assign / transfer meetings for drawing up the request or response to it, for the daily correspondence. Emails can send or receive, even when you travel, while remaining aware of cases.

Disadvantages of electronic communications include technical problems which may affect the delay in receipt of the letter or the inability to obtain it. There are times when investing for any reason can not be read. For non-technical shortcomings can also be attributed, ironically, that the ease of sending and receiving such messages can lead to a large number of so-called spam messages that waste your time in vain. Do not use e-mails for the transmission of confidential information, as is sometimes the electronic boxes are cracked, for example, and the information could fall into unscrupulous hands.

We read the names of e-mail addresses

So, now let’s see in what are e-mail addresses. Conventional e-mail addresses look like this: [email protected], [email protected] The first part of your email address (we’re talking about the addresses of business, not personal) consists of the names and initials of the person to whom you are applying or department name / department or may reduce it. The second part, which immediately follows the symbol @ (at) — is the name of an ISP (Internet Service Provider), organization, or, again, the reduction of the name. Typically, the last part of the address includes the suffixes of domain names, depending on the type of organization (eg, «. Co» for «company», «. Ac» («academic») for the university), as well as the name of the country from which the message is sent (eg, «. no» for Norway, «. uk» for the United Kingdom and so on. d.). Here are some other examples of domain name suffixes:

The layout and location

Below is an ordinary letter. Under the headline figure 1 shows, including recipient and subject, under the number 2 shows the body of the letter under the number 3 — the block of signatures. 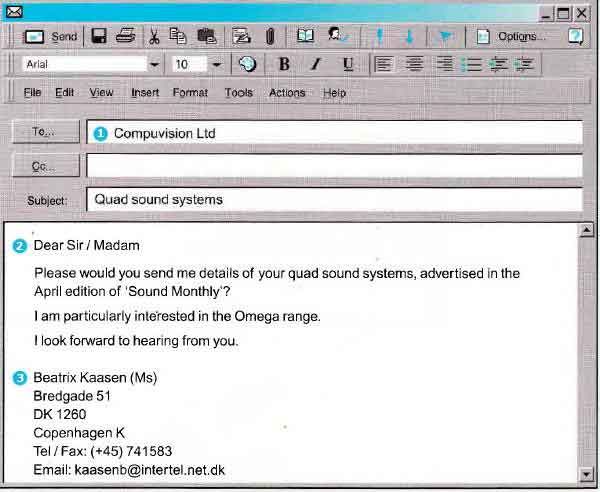 Email — more or less a new invention, as compared to the traditional means of transmitting information, and since it involves quick and mainly informal communication, we often wonder about the style and the rules that should be used in a business email. Usually, despite the apparent informality of e-mails, in the preparation of such letters should be guided by the generally accepted rules of business correspondence. Here are the basic guidelines for the style:

In English, there is such a thing as TLA or Three-Letter Acronym — three-letter abbreviation acronym adopted in e-mail, chat forums and Skype. To maintain brevity messages and save time, people sometimes used in letters such contraction length sometimes exceeds three letters.
This is often used TLA:

Use these reductions very carefully, only when you have already established a friendly chat with the recipient of the letter.

Emoticons (combination of words emotion (emotion) and the icon (symbol)) or, as we used to hear, smiles often used in informal correspondence. They express emotions that can not be expressed by words alone, for example:

In general, it is better not to use emoticons in business e-mails, as this could be seen as unprofessional, especially if you are new to the recipient of the letter and are not sure that he will understand you correctly.

So, go for it! About the types of e-mails about the pitfalls of correspondence in English read in my other articles.