In Proceedings By Catherine  1083

Time flies! Speaking of time in the English language 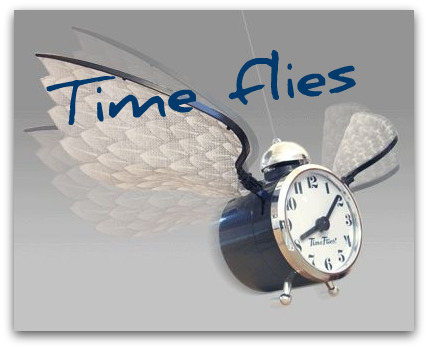 It is said that time is eternal. It has no beginning and no end. Nevertheless mankind measures its defined segments (periods of time). Let’s look at them:

* The word millennium Latin origin, is an exception and plural forms in a special way (sg. Millennium — pl. Millennia).
** Please note that in contrast to the Russian language, where the word of the decade is 10 days, the English word decade means 10 years.

If we talk about the phase (phase) as a moment or a particular stage (stage) of a number of events (series of events), it can be the starting (initial), intermediate (intermediate) or final (final).

We often describe the order of events without a specific time or date. What do we use in this case? We say «current», «next», «next». To do this in English, the following adjectives or adverbs:

Time flies, and what happened yesterday, will not be repeated today and tomorrow has not come yet. What are the phrases we use when describing past events and talking about the future? I propose to enrich your vocabulary by the following expressions:

I propose to consider the idioms with the word time at the example of the story of a student who was trying to learn English:

He began to study English silently with books. It felt right at the time. — He began to learn English from books in silence. At that moment, it seemed right to him.

After a week of study, he met his college mate Mary, who was eager to help him with English for old time’s sake (as he helped her a lot with Maths during college years) but everything was useless — Mary forgot English! — After a week of study, he met a classmate Mary, who really wanted to help him with the English old friend (he’s great help Mary with mathematics while studying at the college), but to no avail — Mary forgotten English!

He made ​​the appointment and met his new teacher on time. — He set up a meeting, and at the appointed time to meet with the new teacher.

Below is a list of idioms that are used in the text:

I want to draw your attention to the phrase in time / on time, the use of which sometimes causes difficulties.

On time (at the scheduled time, neither earlier nor later):

General Director wants the conference to start on time. — The Director-General wishes to conference started on time. (t. e. on schedule, without delays)

In time (in a timely manner, at the time):

On the methods of expression of time and time management you can read in the articles of our blog.