In Proceedings By Catherine  5073

Tie the knot. Wedding in English 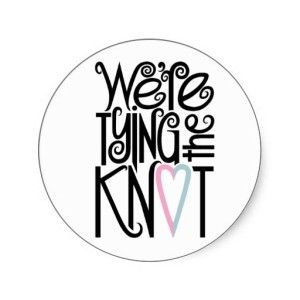 Marriage usually begins with the proposal (proposal) man girl. A man stands on the knee (go down on one knee), sound cherished words: «Will you marry me?» («Will you marry me?»). If she accepts the offer, then the pair is considered to be betrothed (to be engaged) or betrothed (to be affianced). In the United Kingdom there is a tradition that on February 29 a woman may itself make an offer to the man, and he has no right to refuse. Some ladies are looking forward to leap year (a leap year), to realize our plans.

From the moment of engagement (engagement) girl wears the engagement ring (engagement ring) on the fourth finger (ring finger) left hand. In the US, the UK and Ireland this ring is also called a ring of the bride, as are his only betrothed girls. Traditionally, such a ring with diamonds (diamonds) or other precious stones (gemstones), which distinguishes him from the ring that the bride and groom exchanged in the church (wedding ring or wedding band — ring without the stone).

On the part of the bride (for the bride):

On the part of the groom (for the groom):

Common guests from the bride and groom:

The wedding day (wedding day) is considered to be the happiest day in the life of a girl (the happiest day of her life), but often also the most troublesome. When guests arrive at the venue of the ceremony which may take place in the church (church ceremony), or on the road (outdoor ceremony), assistants (ushers) give flowers and guests are seated in places. Traditionally, the procedure for landing visitors depends on how close they are to the bride and groom. The first series (front rows) always take parents and close relatives.

The groom and the best man in the church awaiting the arrival of the bride and her «entourage» (entourage), who sometimes come even carriages (horse-drawn coaches). Bridesmaids come accompanied by friends of the groom. Flower girl goes to the bride, the bride is accompanied down the aisle by her father (bride’s father). This sounds march «Here comes the bride», and the ceremony begins.

The bride and groom give the marriage vows (wedding vow). The Roman Catholic Church oath looks like this:

In the US, marriage vows can also be like this:

Recently, there was a tendency not to follow the classic vows, so a pair of write or take other text of the oath, sometimes poetry. Here is one example:

After the future spouses made ​​vows they exchanged rings (exchange rings). The ring is worn on the fourth finger (ring finger). Some say it is due to the fact that the Romans had previously thought that Vienna is a question of the ring finger to the heart (vein runs from that finger to the heart). Although doctors have long destroyed this beautiful theory, the tradition has taken root.

Previously it was thought that the best day for a wedding — Wednesday (Wednesday). That’s what the English verse reads:

Bride in this day should be put on the following:

The veil or veils (bridal veil) — an essential attribute of a wedding dress. It is a symbol of youth (youth), humility (modesty), innocence (virginity), and drives away evil (ward off evil).

Bouquet of the bride (Wedding bouquet)

Flowers and herbs are combined in a flower arrangement, which is a symbol of fertility (fertility). With him also linked the tradition of the bride throwing a bouquet (tossing the bouquet). Previously it was thought that catching a bouquet of flowers or a few dropped out — is to get a piece of good luck and happiness to the bride. According to the modern tradition, who caught and released the next to marry.

After the ceremony the wedding procession to celebrate such a joyous occasion. There have toasts and speeches (toasts and speeches) in honor of the newlyweds. The first dance during the celebration performed the bride and groom (Bridal Waltz). Waltz is rarely performed, as a rule, the young couple prepares for the other dance to their favorite tune.

The celebration ends with the young couple goes on a honeymoon (set off for their honeymoon). Often the couple embarks on a journey to the next day, which means that they will the wedding night (wedding-night). The groom should bring the bride to the house on his hands, which symbolizes the crossing of the similarities between life before and after marriage (carrying the bride over the threshold).

And after they live together happily, until death do them part.

More to read about the traditions and wedding planning, you can here: http://wedding.theknot.com.

Here is a list of movies wedding theme: http://www.imdb.com.