In Proceedings By Oksana  4257

The Top 40 most common mistakes. Hit parade of errors in English 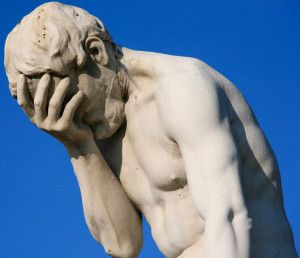 Everyone is starting to learn a foreign language with one main purpose — to learn to speak. And our task — to teach you how to speak correctly. During the training, all students make mistakes, and teachers, in turn, correct, explain the rules, and fix them in a speech to avoid repeating mistakes. But is it always turns to «avoid»? How many times of the lesson, the lesson you said «I am agree», «It depends from», «I feel myself good»? Well very much! And the level of proficiency for these «infectious» bugs do not measure! If at the initial stage such mistakes more forgivable, the students level Intermediate, Upper-Intermediate and Advanced must seriously reflect on their behavior and recognize their mistakes! 🙂

In this article we consider the fact that «in the ear» that interferes with the right to speak — the most common phonetic and grammatical errors of our pupils (spelling mistakes — this is a topic for another discussion).

NB! If you have any problems understanding the English transcription, visit our online glossary. It is enough to double-click on any word and you can hear how to pronounce it correctly.

The adage «write» Manchester «and say» Liverpool «» could not be accurately characterizes the features of English spelling and pronunciation. And I understand the difficulties in pronunciation of sounds [θ] and [ð] (think / this), [w] and [v] (which often is pronounced Russian sound [in]), difficulty in pronunciation of words such as conscientious, circumstances, and so on. n. But these difficulties pronunciations students usually easy to overcome, but not so on the following words:

So, remember the basic rule of reading the English words: not sure — check dictionary.

Sometimes there are funny expressions and suggestions, but let’s start with the «unhumorous» the most common mistakes.

And here is where the verb to be supposed to be, it is often overlooked:

Common are also errors when used «not the» word «is not» meaning, changing the order of words in a sentence. Here are the most favorite ones:

Often these are permitted and grammatical errors:

All of the above error can be called a «serious», but there are «ridiculous.» For example, the expression I feel myself fine raises questions about the actions of the speaker, because this combination feel translates as «touch», «feel» and the phrase I feel myself fine is rather strange, is not it? 🙂 If you want to say that feel great, then we should say I feel _ fine.

Somehow having trouble answering the simple question: «How are you?», «What is the weather like today?». Consider this example:

Very often you can hear how you all love and need you:

There are also students with high or low self-esteem:

And some went there, I do not know where:

Imagine the aforementioned error in a table that you want to print and hang it on the desk (next to a table of irregular verbs). 🙂 Here are collected the best examples of frequency:

If you teach English for a long time, then you must also be a «favorite rake» — errors that do not want to leave. Share them with us, and maybe then we can fight together with them!

PS I thank my colleagues for their help in the compilation of the material!

PPS Special thanks to Svetlana for the idea to write an article!

Do you think that you do not allow such errors? Test yourself by performing the test for the most common errors in English: