The paradoxes of the English language — part 2. What rules can be violated?

The first thing that students learn at Elementary, — pronouns. These are the words that we use instead of nouns, not to be repeated. Explaining the subject of one of his students, I said that the pronoun can stand in the direct case you and I («You and I»), and the object you and me («Me and You»). Student doing well remembered. As it turned out, she was very fond of modern music, and at the next lesson, asked me to listen to the song Lady Gaga «Bad Romance». In the song it interested in one phrase: «You and me could write a bad romance».

— Why me? There must be I?
— Yes, it should be.
— Lady Gaga did not know English?
— Knows only allows himself to ignore the rules for harmonious.
— So I can be neglected!
— Hmm …

After this dialogue involuntarily start to think: But really, I can also break the rules. And who can say what is the norm? How do we know what the English is correct and what is not?

Of course, there is a standard English (Standard English). That you meet the English newspapers, official documents, letters. And, most likely, this option you teach courses at school.

But strangely, standard English is not the official English (official language). And incredible as it may sound, but linguists have classified as a dialect of Standard English. Thus, it is on the same level with the Cockney (Cockney English) or English Yorkshire (Yorkshire English), or South African English (South African English). And, according to the most linguists such thing as a «standard of spoken English» (Standard Spoken English), does not exist.

For example, a couple of decades ago, the Latin word agendum (agenda) was considered a singular noun, and the word agenda — plural. Now you can hardly find a word agendum, very much it sounds strange in Latin. So take a plural agenda and is used as a single. Accordingly, the plural — agendas. Why no? Do you know similar examples? Datum (fact) — data (facts). I think in our lifetime we will be able to track changes and the word.

So, who decides what is right and what is not? Lexicographers — dictionary compilers? We have found out that they are only «selected» words based on their frequency of use.

If not lexicographers decide what «good» and what is «bad», who knows the answer to this question? Editors and authors of newspaper articles! After all, they are working with the Standard English. But in every edition of the newspaper has its own style guide the writing of texts in which contains information on how to write. For example, The Guardian puts the date as «November 13, 1999», which comes first date, month and year. A news agency Reuters writes, «November 13, 1999» — is the name of the month prior to the date, and there is a comma. Other newspapers also have their own rules. So, it turns out that there is no single right way, there are several correct answers, each of which has a right to be.

What can we do, just a fan of the English language? Where to find the truth? For learning English is, for example, such benefits as «Practical English Usage» by Michael Swan — The world’s most trusted guide to problems in English. The authoritative edition of the difficulties in English, which is trusted around the world. Authors of authentic benefits — Raymond Murphy, Virginia Evans, Jenny Dooley, Clive Oxenden — too reliable sources that need to be based in the study of English. However, even there you will find a lot of stumbling blocks and differences of opinion. Let’s look at the cases of opposition grammarians and people not related to linguistics. There are also rules which can sometimes be violated?

Until now, linguists have not come to a clear rule regarding the who and whom. Someone says that the who (who) can easily consume within the meaning of whom (who), but there are strict guardians of English grammar that said the song «Who You Gonna Call?» («Ghostbusters») by Ray Parker Jr. egregious case misuse of who. I hope that in the future these people reconcile anyone. Let’s see what this says about the expert on the grammar of Macmillan.dictionary

The preposition at the end of proposal

It is also the subject of long-standing disagreements is the ending of English sentences. Many people say that you can not finish the sentence pretext. Famous singer Bono in U2 with the song «I still have not found what I’m looking for» a long time under attack by people advocating the purity of the language. Well, once Sir Winston Churchill spoke very funny about this rule:

Try to tell the creators of «Star Trek», Captain Kirk incorrectly used the infinitive in the famous phrase «… to boldly go where no man has gone before» (… boldly go where previously untouched by human hands). We do not like the need to share and embed between the infinitive and the verb to another word. Rule called the split infinitive, controversy around «can be divided» and «can not be separated» does not cease with the end of the XIX century. Here expert opinion on grammar, not to leave questions on the topic.

Conditional sentence if + will

Most recently, I was very disappointed to learn that after If we can say will! All my life I have been taught in school If I do, I will do — no will after if. But you can, but you can when will show consent. Also, such a design can show that a person insists on something (insist on smth). And, most importantly, you need to focus in the speech voice that will, that he did not seem alien.

Preventative or preventive (in the sense of a preventive, proactive)? Rely on intuition, it tells you which version is correct? No, both are true! 🙂 Ironically, many do not like the word preventative (prophylactic), but also because it represents a «warning.» It is synonymous only preventive frequently found in writing than in speech. 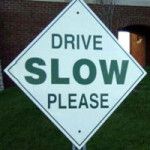 All my life I thought that only slowly right. Until then, until I saw signs that say drive slow. What? What is it like? The famous American comedian, famous for his parodies of contemporary hits, «Weird Al» Yankovic even once went on a tour of American cities to fix signs with an obvious mistake and a violation of the rules of English grammar:

Quietly, «Weird Al» Yankovic, even there is an explanation. We are so used to the adverb — it is always on the floor — ly, not even imagine how could it be otherwise. But there are adverbs, called Flat adverbs, they are often used in short sentences without imperative — ly at the end.

They for the singular

They = «them» and «they» = they, what could be easier? «They» — is the plural, but not only! Not certainly in that way. Imagine we have a suggestion:

In this regard, they universal word, it replaces «he (she)», because English is still one of a kind. The most important thing is they — it is a pronoun denoting the singular. And again we come to the aid of the video Macmillan education.

So, you can break the rules? I am inclined, that after all, we like to learn English, better to stick to the standard rules of grammar. In the end, Quod licet Iovi, non licet bovi (lat. «What is allowed to Jupiter is not allowed a bull»). Maybe creative people to harmonious allowed all, but we need to be careful. With the rules easier to live according to the rule easier to work with. But all rules have exceptions. And English — the language of logic rather than clear rules and laws. If your proposal even remotely makes sense and logic, to what extent it is true. And whose side are you on?