The impact of temperament on the study of a foreign language

Scientists have since ancient times tried to discover patterns of functioning of the human psyche. For example, the ancient Greek physician Hippocrates put forward the idea that the livelihoods and health depend on four basic juices of the body: the blood (sanguis), lymph (phlegma), bile (chole) and black bile (melanos chole). In the future, its classification formed the basis of modern notions of temperament.

In psychology, a temperament (lat. Mixture proportioned) to understand the totality of the individual properties of the human psyche, manifested in his behavior and activity. An important property of temperament is its relative stability over the life of a person.

In other words, it is inherited properties of the nervous system, affecting the speed of assimilation of knowledge and skills. These properties determine the overall mental activity, the pace and the rhythm of activity, emotion and affect memory, attention, perception. Some people mental activity occurs uniformly, they are calm, balanced, sometimes slow, stingy, and their movements are suitable. Others, on the contrary, are very mobile, restless, noisy and animated.

Thus, temperament does not define what a person does and how it does it.

It was found that such properties of the psyche have a significant impact on the process of learning a foreign language. Depending on the speed of perception, focus, mental tempo of the students in a completely different master a new language.

Also, learning a language, of course, it depends on other conditions (for example, the motives). If a person is interested in the result, regardless of the characteristics of his temperament, he will do the job faster and more energetic. However, in this article we are primarily interested in the properties of temperament, which appear similar in different types of activities and a wide variety of purposes.

So, there are four basic types of temperaments: choleric, sanguine, phlegmatic and melancholic. Let us dwell briefly on each of them, as well as their impact on learning a foreign language.

He is the owner of a difficult temperament. Unbalanced, sometimes irascible, sometimes difficult interlocutor. He sometimes suffers from their irritability and short temper, but nothing with them and do not lose control during emotional circumstances. However, if there is interest in showing enviable creativity, energy and integrity.

Languages ​​are often choleric easy «to fly.» Being an extrovert by nature, he strives for new contacts, to communicate with people and easily enter into a conversation without experiencing shyness in front of the language barrier. Good verbal memory and speed of reaction also allow choleric easier to learn the language. The factors hindering the study could be a lack of perseverance and emotional swings.

Normally quickly adapts to new conditions, energetic and productive work, has attracted considerable interest. It is easy to come into contact with new people, restless and in need of new experiences. Often it has trouble on long and monotonous operations. In this regard, it can not successfully do the work, which requires a long and methodical voltage stability of attention, patience. Being in the eternal search, it does not reach the intended target not because it suffers from a lack of willpower, but simply from the regular change of purpose.

Just like choleric, sanguine is not experiencing difficulties with foreign languages. His sociability and charm promotes the development of language skills and the perception of foreign speech. The high rate of learning also helps to cope with the tasks sanguine. The factors hindering the study of language, include certain superficiality and inconstancy, and constant shifting attention to other areas (distractibility).

Slow, calm in the actions, facial expressions and speech, phlegmatic can work long and hard, without changing the type of activity and patiently enduring all difficulties. Persistent and stubborn, he does not like empty talk and rarely loses his temper, calculates the forces and gets the job done.

Being an introvert, phlegmatic has a low level of productivity of verbal (verbal) memory and may have difficulty with spoken language. It takes time to get used to the other party and to establish contact. But, unlike the choleric and sanguine, he is more capable of methodical activity that requires endurance and persistence, and did not get tired of it.

He is characterized by restraint and muffled speech and movements, as well as some shyness, timidity, indecisiveness. Melancholic emotionally vulnerable, more likely to experience anxiety, fear, often overestimating the nature of the threat, such people easily become victims of violent crime. Strong effects often cause long melancholic brake reaction («discouraged»).

When learning a foreign language can be melancholic face the fact that his increased anxiety preclude the entry into verbal contact. As a result of the successful assimilation of the speech can be lower as compared to other types of temperament. However, if given the opportunity to reveal melancholic, he distinguished himself as a deep and thoughtful interlocutor capable of meaningful dialogue. Also to its advantages include the ability to learn the language individually, because he, unlike the choleric and sanguine, no need to constantly be in the team.

It should be noted that certain types of pure temperament almost never occur, and it is a combination of the prevalence and characteristics of certain types, which determine human behavior.

Mastering a foreign language requires a systematic and hard work. It is important that the student knew why he spends time and energy — t. E. Have the motivation and clearly defined a specific goal. However, in addition to productive employment must take into account peculiarities of temperament. It is important to remember that there are good and bad temperaments. Each student has strengths and weaknesses that need to be taken into account in the process of language lessons. Therefore, the efforts of the teacher should be directed to the clever use of the advantages and benefits of a particular student temperament, combined with the neutralization of the negative manifestations.

Unfortunately, the difference of temperaments are often overlooked, and it leads to an infinite compared with others, in an attempt to take over someone else’s style or tune out the stereotype. And yet, in these individual to individual and are the foundation for future success.

Appendix: Illustration of the famous cartoonist H. Bidstrup reaction of the four people on the same incident: someone accidentally sat on a hat resting on a bench man. The result: choleric was furious, phlegmatic calmly put his hat on his head, angry, scary melancholic, sanguine and laughed. 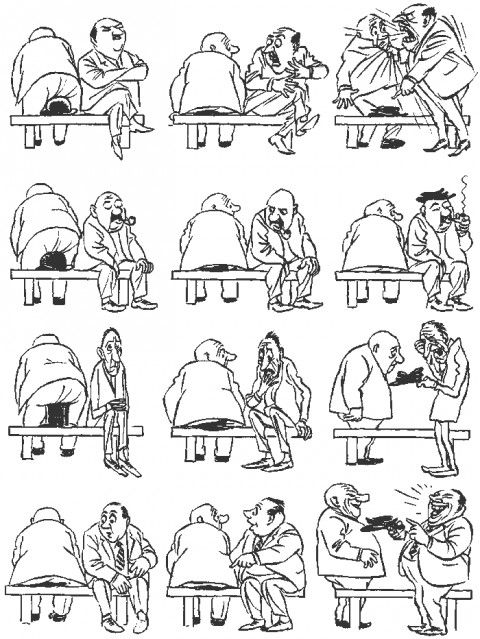