In Proceedings By Svetlana  6052

Thanksgiving Day (Thanksgiving Day) is traditionally celebrated every year in North America, mainly in the US and Canada. Interestingly, the date of the celebration in these countries are not the same. So the US Thanksgiving falls on the fourth Thursday in November (in the current 2014 is November 27), and in Canada — on the second Monday in October. There must be a difference between Canada and the United States?

Thanksgiving Day in the US — Family Day 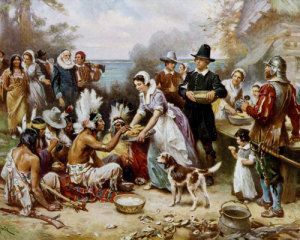 Many Americans love Thanksgiving even more than Christmas or Halloween. With what kind of love is linked to this celebration? Firstly, it is a day when all the family members get together (family reunion), regardless of who lives where. Each year, any self-respecting American spends Thanksgiving in the circle closest to him. Second, the food! The immense amount of food that is absorbed without any remorse: once a year you can! And in gastronomic pleasures Americans no equal (unless we can make them compete in the New Year with our salad and herring under a fur coat :-))!

The first celebration of Thanksgiving Day is officially held in 1621, when American immigrants (settlers) to share a meal (shared a feast) to the Wampanoag Indian tribe (Wampanoag).

Interesting fact number one: Thanksgiving Day in 1621 the colonists and Native Americans (Native Americans) ate deer meat (venison), game (wild fowl), dried vegetables (dried vegetables). None of what turkey (turkey) — traditionally the main dish of the holiday — there was no question! How did the turkey took its place of honor on the table? Offer 2 theories: wild turkeys were widely circulated in the territory of New England, so then they have chosen and «nail» the festive table. And then, turkey — this is ideal to feed a large family, because bird carcass can weigh 10 to 18 kg!

Black Friday in the US

Today, the celebration of Thanksgiving Day is stretched until Sunday (stretch out the holiday over a weekend). How can you not love a holiday that gives the right not to work as much as 4 days ?! What people are doing it all the time, not only is gluttony? Yes, the whole family gets together, they tell each other about the events that occurred in their lives, and watching football (American football). But even this is not the most exciting experience! Have you heard anything about the Black Friday (Black Fridays)? No, it’s not Friday the thirteenth — a day of incredible discounts! Next Friday after Thanksgiving is known as Black Friday. Best of the Americans on the tradition of Black Friday in the US no one will tell.

Useful words from the video «The violent history of Black Friday».

Not surprisingly, this day is called Black Friday: every year several people die in the struggle for a new TV with a discount, dozens injured varying degrees of severity. Is it worth the new Xbox such victims? Who knows. But the disappointing statistics. And most surprisingly, not all the people who spend the evening and night in the street in anticipation of the opening of the store will receive your goods at a discount of 70-80%. Typically, the number of products on sale is very limited, which heats the already heated people’s interest. In this regard, people are trying to take a place in the queue to be the first to squeeze into the door of the store and grab a tasty toaster or hair dryer. Almost all shops arrange Black Friday: Wal-Mart, Best Buy, Target, Macy’s.

Interesting fact number two: if there is Black Fridays for offline customers, you need to have something to offer those who love to buy online stores. Cyber ​​(Cyber ​​Monday) approach? Cyber ​​Monday — an annual sale of goods in online store that popularity is not inferior to the offline his «brother.» The best-known retailers — e-bay.com, amazon.com, 6pm.com. 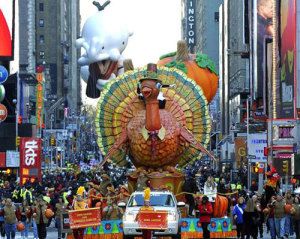 Black Friday in the United States opens the holiday season (holiday season) before Christmas. In New York, in honor of the Thanksgiving Day parade is held the annual Macy’s. Group Macy’s — a chain of retail stores in the United States to head a department store in New York. Each year, Americans cling to their television screens to within 2-3 hours to watch coverage of the parade and marvel at the amazing «floating» in the air figures.

The tastiest holiday of the year

We have already talked about the tradition of «good food» for Thanksgiving. Everybody knows a turkey served with different dishes. Baking turkey itself — is a ritual. Each family has its own family recipe stuffing (stuffing) turkey. Often it is vegetables, bread and spices. This filling is very well with white meat poultry. Also served mashed potatoes (mashed potatoes), sweet potatoes, which we call sweet potatoes (sweet potatoes), casserole of green beans (green bean casserole), and for dessert — pumpkin pie (pumpkin pie)! And, of course, cranberry sauce (cranberry sauce) to the turkey! A festive table people say what they are thankful to God, fate or family.

Interesting fact number three: the night before Thanksgiving Day in America is considered a «great night of sales in bars and pubs» (the biggest day for bar sales). Under the «sale» understand the various offers and discounts on alcoholic beverages. The reason for this phenomenon is quite banal: people come to their home town to meet relatives, of course, they meet their friends in the yard and at school. What are old friends? Spend time in local bars and cafes, recalling happy days carefree childhood. They say that the amount of alcohol drunk on the eve of Thanksgiving at times surpasses drunk for Christmas, New Year or St. Patrick’s Day. Someone brings another reason at times grew up drinking the day: how to survive another encounter with so many families without a slight feeling of intoxication? 🙂

Nobody argues that Thanksgiving Day in the US — it is much more than just sales and an immense amount of food. Family holiday, as it is now — this is another reason to all near and dear people to see each other, to forget about the problems of the world, just immerse yourself in the warm and welcoming home.