Secrets of our memory. Interesting methods of memorizing English words

In this age of high technology the word «memory» to associate not only human, but also computer memory. Unfortunately (or perhaps fortunately), we can not infinitely expand the volume of our minds, unlike our electronic assistant. What is going on with our «computer» — the brain? He arranged a much more progressive and can configure itself and adjust. The basic principle of self-regulation of the nervous system: «What is not developing / training, then he dies / is weakening.»

With regard specifically to the memory can be paraphrased as: «What is not being used — is removed.» Roughly the same make computer software for clearing the memory, with a certain regularity, giving us a list of rarely used programs and offering to remove them. Since the nervous system and protects us more, our memory deletes all without demand («Why remind the owner that he wants to forget or do not want to remember ?! Do not use, so do not need!»).

One reason for forgetting also the impact of events that occurred before and after something memorable. For example, you have been very excited about the problems at work, so when you met after work friend, you could not concentrate on a conversation with her and as a result not clearly remember what the conversation was.

Each of us keeps in mind (I would say, the memory keeps us) «unforgettable» moments of life. Try to remember them. They clearly stand up before our eyes, as if it were yesterday. Completely different in the time frame, happy and sad. What is their secret? They are united by one thing — they are associated with strong emotional or personal experiences.

The memory we use at every step. But to underestimate its role in the study of foreign languages ​​is simply impossible! After all, you need to remember so many new words, vocabulary and grammatical structures. And they all seem strange, unfamiliar, because another language — it is a completely different world, different from ours, the usual. This is your brain may signal the failure to remember that we need. What to do?

First of all — to create in the mind of the image of «a foreign language — it’s fine» (well, at least «good»). Remember, the nervous system protects us from possible negative effects on the body? And if you have a foreign language will be associated with difficulties, the need to overcome themselves, the memory of how the mechanism of this protection is very simply reject everything associated with this.

Therefore, a step №1 — is to answer honestly to the question «Why do I actually need this language?». The faster you answer, and more specifically, the higher your motivation, and therefore more likely that the memory «recognizes» it (the language) as an «ally». Then we move the bridge connecting a foreign language with a native to show the memory that is not a foreign language, and a stranger can become «their».

This will help us to approach associations — one of the most cheerful and efficient to memorize English words and constructions, highlighted in the first half of the XX century Russian psychologist AR Luria.

How to memorize English words? Takes the word, say, tree (tree), find consonant with his Russian word (multiple sounds enough), for example, the number «three», come up with an image that includes both words — three trees and clearly present yourself by the river on the opposite bank of which grow three trees. The image is fixed.

Example for motorists — astonish — surprise. And presents: open garage, and there is an Aston Martin car. And you’re wondering, «What is he doing here?». And then you wake up and groan of disappointment.

Or a great association of my students — generous — generous. General, and therefore, should be generous!

Grab — grab, grab. Introducing rake paddling everything in its path.

Grab bag — handbag for small items. Hand like a rake, quickly grab a baguette, is put into a bag and run to work.

Shampoo «Head And Shoulders» helps to remember just two parts of the body, as you can imagine, that dandruff with which he is struggling, no longer pour in from a head on his shoulders. Also, the creators of shampoo made ​​the coup, calling their products in such a way, as the idiom «head and shoulders above somebody / something» means «above the head,» «much better than anything.»

His speech stood head and shoulders above the rest. — His speech was much better than the rest.

My dad towers head and shoulders above his brothers. — My dad is much higher than their brothers.

Some words do not need additional associations, their meaning lies in its derivatives (for those who already have a certain vocabulary):

Push-up — push-up. You can draw a straight association, just to share the word of half push — push, up — up. It turns out — push up, lift. It also becomes clear what its name push-up bra.

Dotcoms — Internet company. Word has built on the association with the Internet address of the company, which usually ends with «. Com» (dot — dot).

Destination — the destination destiny. By analogy with the word destiny (fate) — a place designed by fate / destiny which leads.

Bald — Bald. Man haircut nalyso baldeet and that he is now bald.

Obstinate (obstinacy — stubbornness) — stubborn, stubborn. Imagine a donkey, which is a hard-nosed as «On Wall Donkey» — obstinate.

Eye — Eye. Something has got into the eyes, shouting, «Ouch!»

The most effective memory techniques

It is also one of the most effective techniques of memorizing English words psychologists believe:

Method associations apply absolutely everything that you would like to remember.

Poetry as a method of memorizing English words

That’s how easy and fun to learn, we offer such «harmful» irregular verbs in verse following authors:

Paul Natasha sweep-swept-swept (sweep)
House in order keep-kept-kept (contain, store)
Because she’s know-knew-known (to know)
What once grow-grew-grown (to grow)
And, of course, dream-dreamt-dreamt (dream)
Marry no problem
I am a brick throw-threw-thrown (throw)
It is the window fly-flew-flown (fly)
My uncle catch-caught-caught (catch)
The Pope with his mother bring-brought-brought (give, take, bring) …

Read the full version of the book AA Paltsyna «English in the family circle.»

The full text of the poem can be read on the website http://www.stihi.ru.

Remember the difference with the method of association

In order to remember that, unlike the Russian, in English, change beds subject and th-th-th as the changes make sense, can be represented as follows:

The dog walks Tom. — Dog Tom walks. (and such a happy doggie walking on its hind legs, «walks» on a leash master walking on all fours with his tongue hanging out)

Often, the grammatical structure «have / has something done» confused with a temporary form Present Perfect (have / has done something). To avoid this, we shall understand the following examples: 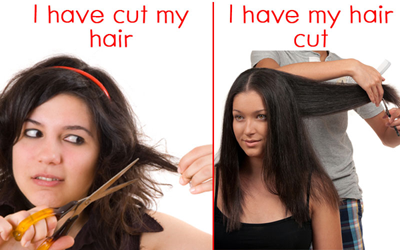 I have cut my hair. I am a hair cut / cut his hair. And presents: you’re standing in front of a mirror with a pair of scissors in one hand and clipped a lock to another. You are horrified at what he saw! This means that you did it yourself.

I have my hair cut. But here you are sitting in an armchair in a luxury saloon with a beautiful hairstyle and admire him. And next to a happy barber, who has done his job great. This sentence can also be translated as «I am a haircut,» as we say in everyday life, without bearing in mind that did it ourselves. However, the meaning is — someone did it for you or for you.

But how to remember the difference between in time and on time:

Letter «i» resembles a burning candle. You suddenly come to visit friends, and there is cake with candles on the table. You came just in time — in time (at the right time in the right place).

And the letter «o» is round like a clock face. You rush to the meeting, looking at his watch and rejoice — you have come exactly at the appointed time — on time.

The difference between the will, to be going to do something and form Present Continuous in the value of a clear purpose in the future, you can remember, presenting:

You’re a young woman (man), which does not have even more of a young man (women), which is not much know how to cook, host and generally little understanding of family relationships, but suddenly say:

All, of course, we will treat this as some kind of a generalized request, very ephemeral and distant future plans.

Suddenly, the next day you meet a guy (girl) of your dreams, you have an excellent relationship. After some time you decide to get married and say native:

That is, you have the intention to do so.

And now the wedding date is assigned, and you are telling a friend on the phone:

And the girlfriend realizes that everything is well-planned, and maybe you call to invite her to the wedding.

With these and other methods and techniques you can remember everything, everything! Even the 16 forms of ill-fated time, you can easily remember, realizing, at last, what its unique role. You can also write your own examples and illustrate their pictures (even schematic).

As you can see, this technique is so versatile and boundless as our imagination is boundless! So arm yourself with a smile and a good mood and go!

Impossible is nothing! Enjoy your English!