Rabbits — is not only valuable fur, but also a good sign. Talk about superstitions? 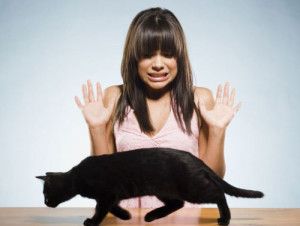 Oh, these people! Learn to build skyscrapers, created a mobile phone, fly into space! A black cat walking on the road, afraid. Well, not strange? From the ancient times, superstitions (superstitions) play a significant role in human life. And I am no exception. Whether because my mother is very superstitious (superstitious), or for some other reason, believe me there quite often. It is time to write a book. But perhaps I’ll start with the article.

In many countries there is a sufficient number of similar superstitions. For example, we all know that black cats (black cats) are considered to be accomplices of witches (witches). «They say, no luck if a black cat pass the way» (If a black cat crosses your path, you will have a bad luck) is sung in one famous song. So people wretches chased out of the way. Or the sight of a black cat, prefer to wait that someone else crossed the road first, thus taking on the bad luck. I imagine my surprise when my friend the Englishman at the sight of a black cat, and ran to cross the road before me. It turns out that in England, black cats bring good luck (good luck). They even greeting cards (greeting cards) are often printed. 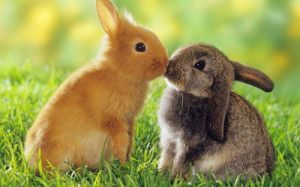 The same Englishman was just a storehouse of old British beliefs (beliefs). As soon as he did compliment, he immediately looked for the wooden surface to which you can touch right index finger, while shouting «Touch wood!», Touch wood. He taught me how to say «Rabbit, Rabbit, Rabbit» (rabbits, rabbits, rabbits) to attract good luck. The procedure is simple — on the first day of the month your first word should be «rabbit». To enhance the effect — repeat three times «rabbit, rabbit, white rabbit», «rabbit, rabbit, rabbit» or «rabbits, rabbits, rabbits». So you attract good luck for the whole next month. Still more remarkable, if you are currently wearing rabbit’s foot (rabbit’s foot). In Britain, it is also to bring good luck. Everyone except rabbits. 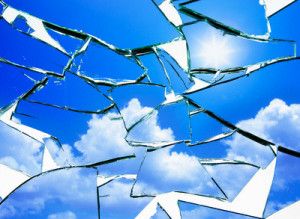 Though I never had the chance yet to visit Albion, I have many friends the British. From them I learned a variety of superstitions. Some are familiar to us, others cause confusion or a smile. For example, the passage under the stairs (walking under a ladder) or expansion is an umbrella in the house (opening an umbrella indoors) jinxed. Broken mirror (a broken mirror) can generally be doomed to suffering for 7 years. Ah, I would know my one year old niece that good from sudbinushki not have to wait until school age.

Some superstitions even life-threatening. Several years ago I worked in an American camp. Humming to himself under his breath, I was carrying a tray of dishes in the kitchen. Upon entering, I «got» a good Zhmenya salt in the face. His eyes stung, I stumbled, lost his balance and crashed to the floor. Plates — to pieces! The situation in the best tradition of American comedy. As it turned out, my colleague from New York spilled an entire pack of salt (spilt a pack of salt). And to scare away bad luck, he threw (throw) a sufficiently large «pinch» of salt over your left shoulder (over the left shoulder). Well, not calculated. The most interesting thing, already lying on the kitchen floor, I heard applause. Indeed, in many countries breaking dishes attracts luck. 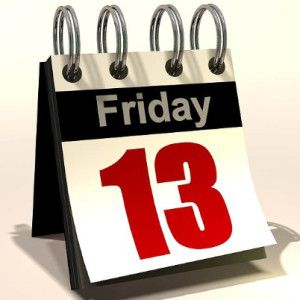 Also in the American camp with me to work a few Canadians. By force of circumstances they had dinner together with all the staff of the camp. Kitchen staff left them food, which they took away later. Canadians, in turn, eaten, the dishes were returned to the kitchen. What’s funny, dishes are not washed ever. Canadians have relied on an old belief, they say, if the neighbor treats you to a meal, a plate should be returned dirty, or you will have bad luck (if a neighbor brings you a plate of food, you must return the plate dirty; washing it will bring bad luck). We are angry with them, and very much doubt the existence of such signs, but could not do anything. Although it is possible that Canadians, in fact, the guys were superstitious and believed in the curse «of dirty dishes.» Because, when it was Friday the 13th (Friday the 13th), they are all without exception stated that sick and go to work is not going to.

By the way, at the number 13 in the US and several European countries, a lot of prejudice. For example, in some buildings, floors are numbered in such a way that after the 12th once was 14 minutes. Although, in my opinion, the word paraskavedekatriafobiya (fear of Friday the 13th), looks much worse than the actual number.

But in the ranking of the leaders of superstition for me are the Romanians. This amazing people believe that the first of March is awakened from his sleep varied evil (evil spirits). And in order to protect yourself from their influence, particularly superstitious Romanians put on a red thread on her wrist (wear a red thread on a wrist). And also … wear underwear inside out (wear underwear inside out) during the whole of March. And how childish they rejoice at the sight of two butterflies flying together (two butterflies flying together). According to the Romanian believe this — to love. 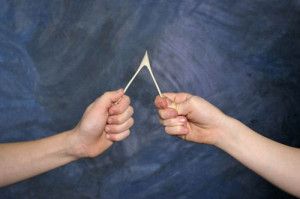 To attract good luck, you can not just watching the butterflies. You can like my Irish friend, hang a horseshoe over the door (put a horseshoe above your door). It is desirable accidentally found. Hard to have — in the XXI century horseshoe on the road is not lying. Either find a four-leaf clover (find a four-leaf clover). It can be considered a success chance encounter with a chimney sweep (a chimney sweep), as my Slovak friends. Can I, in the midst of dinner on the American Thanksgiving (Thanksgiving dinner), make a wish, breaking a bone Vilkovo (a wishbone) from eaten turkey (a turkey). One of the traditions of this wonderful holiday. Who deserves the honor of breaking a bone, decided the whole family. It can do so only two people. Someone broke off a larger piece — in fact the desire and fulfilled (a wish will come true). Americans have even launched the sale of plastic Vylkove bones. You can at least every day to think.

Yet I am deeply convinced that luck will visit you, if you listen to a good song. And sing it to comb her reflection in the mirror.

Useful words and phrases to remember from video:

In general, the way to attract good luck infinite. For every taste and color. Wait for a black cat looking clover, wearing red strings on their wrists, talking about rabbits in the morning. Just having decided to throw salt over your left shoulder, take a look beforehand. And learn English to communicate with people of different cultures and learn here are interesting.