Undoubtedly, every person, who is studying English, is necessary to overcome the language barrier and gain confidence in speaking. But often, when this same barrier overcome, many are beginning to make more mistakes that can cause misunderstanding between the interlocutors and very awkward situation. However, this in no way should you rasctraivat or intimidating. Through this, you must go through. Think of your mistakes with humor and learn from them. I would like to share your collection of funny situations encountered on the way to improving English. Hopefully, they will not only cause you smile, but also help to remember how to speak it is not necessary.

Soap or Soup. How not to order a soap in a restaurant

This situation happened to me during one of his first trips abroad. I already thought that I speak in English quite well, and with confidence in a restaurant waiter said: «I would like some soup» («I would like the soup»). The waiter looked a little puzzled, but a minute later was back with my order. Imagine my surprise when I saw that he had brought the soap! He asked: «Can I get you anything else?» («Can I bring you anything else?»). I look at my soap and I understand that it is necessary to have something else (anything else). I’m very confused and did not know what to say. But soon I realized that the word soup (soup), I spoke as a soap (soap), explained this to the waiter and got his long-awaited soup.

Potatoes free or French fries. Why not give the fries for free?

The following story happened to me and my friends, too, for a long time, but we still remember it with a smile.

One day we decided to have lunch at McDonalds (as without it in America!). We asked a few servings of French fries and a couple of dishes. All were convinced that the word stock is English and not Russian. Therefore we asked potatoes free. Cashier little confused and said something like: «No, nothing is free here!» («No, there is nothing is free!»). We told him again: «Potatoes free». And he: «No-oo! You have to pay! «(« No, you have to pay! «). The poor man was about to call for help. Nobody could understand, we have to show him a picture of the menu. In the end he said: «Oh, French fries! But you still have to pay one dollar! «(« Ah! Fries! But you still have to pay a dollar! «). So we realized that fries in English would be «French fries».

It turns out that the word «free» comes from the name of the Belgian Frith, who this very french fries invented. French-speaking Belgians brought a dish to America, so Americans thought it was the French pudding. So they called the potatoes: French fries (French fries). 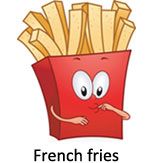 Swallowed or Swollen. Why swallow fingers?

This story is a good proof of how important it is to teach irregular verbs.

Once I hit the car door finger. He was very swollen, and I called the clinic to make an appointment or to find out what to do.

I tried to explain over the phone that my finger was swollen and very sore: «My finger is swallowed and hurts.» A woman who is clearly tired of the calls of foreigners like me, was something like the following: «Swallowed? Who swallowed it? Did you swallow it? Why would someone swallow it? «(« Swallow? Who swallowed, then you swallow it? Why it had to swallow? «). Then we still found that I wanted to say «swollen» (swollen), and not «swallowed» (swallowed).

Carrot and Parrot. Why carrot live in a cage?

And this is one of my favorite bugs. That’s really a lot of years, it will not let me rest.

Once I helped a friend of the family, which do not speak in English, to find housing. When we found a suitable option, it’s time to fill out some paperwork and answer questions. They entrusted it to me. I keep filled. Column pets (pets), I wrote, that they have a parrot.

After reading the information, the owner smiled and said: «Actually pets are not allowed here, but since it’s just a carrot …» («In fact, it is forbidden to keep animals, but if it is just a carrot …»). All is not yet realized that instead of parrot (parrot) I wrote a carrot (the carrot), I began to explain: «Yeah, it’s just a small carrot and it lives in a cage» («Yes, it’s a little carrot, and she lives in a cage «). Well at least I did not say that she is able to talk! The same day, a strange Russian family with carrot, living in a cell, allowed to move into an apartment.

Heat and Hit. Why beat my friend?

Witness the following story, I became quite recently, when my friends and I were returning from the theater.

It was late and cold. My friend, who has very little in English, liked the guy. Talking about the weather, she asked him to warm her. Apparently, vaguely remembering the expression of heat up (heat up), she said: «Hit me» (which means «hit me»). American wondered repeated several times. Once it is confirmed that really wants it, he took it and hit her in the shoulder with his fist. She was shocked and never talked with him.

That’s how ridiculous they ended not had time to begin a novel.

Incidentally, the «warm me» in English is «warm me up».

Make up and Make out

In terribly awkward situation I was recently a friend of mine from Russia. He came to America for a couple of weeks, and tried to use every opportunity to learn as much as possible of the new. His favorite thing was to study the phrasal verbs. For it turned out great discovery that the verbs make, get, take in combination with a variety of pretexts, can have so many meanings. He is actively engaged in their learning.

One day, after a quarrel with a man, he realized that he was wrong, he decided to make peace with him. Going up to him, he said: «Before I leave I want to make out», — meaning that before he leaves, he wants to make peace. In fact, make out — this is American slang meaning «to kiss» (and not only). His companion is very surprised and asked: «With whom?» («C whom?»). Hearing the answer: «With you» («C you») — he was not a little frightened. Within minutes, my friends, dying with laughter, listened to the story of our friend how important it is for him. Poor Americans at this time trying to avoid the fact that our friend, in his opinion, was going to do with him. In the end we both pity and explained that he meant make up (put up).

In conclusion I would again remind you: do not be afraid to speak in English, and make mistakes. Just be careful with particularly menacing looking interlocutors. 🙂 If you have your funny stories, I’d be happy to see them in the comments.