What is this mysterious word is — «Hinglish»? Quite simply, Hinglish — a mixture of Hindi (the official language of India) and other Indian languages ​​such as Punjabi, Bengali and so on. D., And English, which is the second official language in India. According to world statistics, the Indian English is spoken by about 350 million people living in Indian cities.

It is not difficult to guess what the young people living in urban India, being active functioning of contemporary processes of globalization of the world, are the most ardent supporters of the English. Coupled with the development of television and the Internet, this has led to the introduction of English in the local Hindi, which could not but cause confusion of vocabulary and grammar of these two very different languages. Thus, as a result we got a dialect called Hinglish, t. E. English + Hindi, which explains the essence of the newly phenomenon.

What are the features of Hinglish? Indian English — rich language, which arose as a result of both borrowing from the literature, t. E. The official language in compliance with all rules and traditions, and from the spoken, so-called national language, and, of course, from the British Standards speech. However, the history of India is also interesting that in this case there is a borrowing of words and phrases, not only British but also American English. This has led to discrepancies in the spelling. For example, in Indian newspapers can be read as a color, and colour.

But the biggest difference is Hinglish the English pronunciation. People from different parts of India pronounce words with a different accent, and English words, in turn, is exposed to strong phonetic transformations. It is further proposed a video in which nebezizvestny hero of the series «The Big Bang Theory» («The Big Bang Theory») Raj Koothrappali trying to speak perfect English, while his friend Howard Volovitts, native English, mimics the Indian speech. Who will turn out better? Look. Below is a list of phrases used by the heroes of the next video with the translation. 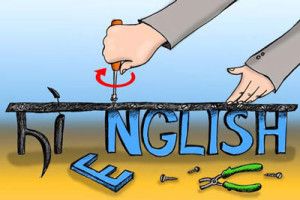 Hinglish can be expressed in many forms — it can be non-existent words similar to English or are half-English. Also Hinglish you can call the local way of pronouncing English words. That is, you can watch absolutely chaotic ways of mixing, the whole point is that there are some clear boundaries or rules, but because the Indian version of the English language, being popular and used is constantly changing, it becomes even richer.

If you had the opportunity to watch Bollywood movies, you will probably have heard the sound of Hinglish, because it is a modern expression of Hindi, this is one of its basic functions. «Modernity» in this case is expressed in «nezatsiklennosti» traditional rules.

By mixing the two languages ​​results in rapidly growing popularity of Bollywood films and the ongoing implementation of Indian experts in IT-technologies. Also, India is renowned for its technical support to understand that — quite a feat, since the most frequent users of Internet services come from European countries and America, who have never been to India.

Moreover, Hinglish used not only in India but also in the UK, and the reason for this was the same all the Bollywood movies. For example, the British entered the lexicon of colloquial phrases such as innit?, T. E. The short form is not it? Can be used as a reduction in phrases like «It’s going to rain, we need umbrella, innit?», That is, do not we?

The special features of the use of English in Hindi is:

With regard to the characteristics of the Indian pronunciation of the English language, these include soft / l /, which is associated with the peculiarities of the national language phonetics. The lack of sound in Hindi / z / makes itself felt when we hear / j / instead, for example supposed / səpəʊjt /.

When the Indians want to establish a dialogue with the British or American, they use Hinglish, but then, and found misunderstandings and disagreements, as many stable idioms and phrases used by the British, have a completely different meaning in India, and some — are used only there.

The Indians asked the name of the person so: «What is your good name?», As in Hindi in this matter there is a steady phrase «Shubh naam», which means good name.

At the moment, Indian English is most often used in advertising campaigns, slogans and posters. In this way it is easier to attract attention to the product. The use of English words shows that the brand is modern and focuses more on young people. And if you want to get acquainted with the interesting phenomenon of Hinglish, we strongly recommend to delve into the world of Indian newspapers and television. Want to improve the skills of perception Hinglish listening? I advise you to pay attention to the stand-up comedians. Their humor will introduce you to a local touch and show highlights and stereotypes about the life of Indians. Enjoy!