In Proceedings By Catherine  5455

When I began writing the article, the question arose, how detailed it should be. In this article I present is not the most detailed material on Heraldry, as a general idea of ​​the history of the origin of coats of arms, their use and symbolism. First, let’s look at a video that provides an overview of the topic.

Let’s turn our attention to useful vocabulary from the video.

How did everything begin? How it all began?

Insignia Systems (marks of distinction) and symbols (symbols) have existed since ancient times, but the heraldry (heraldry) as such was born during the feudal system (feudal system) in Western Europe. Prototypes of coats of arms were placing decals (usually images of animals) on clothing and military armor. Sometimes these posters appeared on coins and symbol of the city. Such signs were not yet emblems. They have become such only when they began to be inherited. 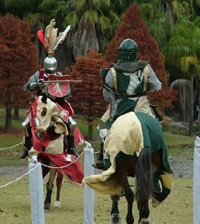 In the XII century, after the introduction of knight’s helmet with a closed visor, the need in some way to distinguish between the participants of the tournament, so we started using a special coloring, symbols and figures, which are sometimes placed on top of the helmet to the crowd from the top was clearly visible knights. In addition, the armor of the knights were often the same type, so it was difficult to distinguish them is not something that from a distance, but up close. Therefore began to use helmets with tops — spiked helmets (ornaments of feathers and horns of animals were placed at the top of the helmet), pennants and banners (standarts). The combination of these signs and a shield in the future form the basis for the emblem.

Interestingly, and the very meaning of the word «coat of arms» in English. Coat of arms (literally «Cape weapons») is a cape with the coat of arms of the owner, which is worn over the armor.
The development of civilization in Western Europe at the end of the XII century and has led to the need to consolidate the ruling class, and the coats of arms clearly indicated social status, location, ownership of land and occupation of their owner.

Dibs, lion is mine! Chur, the lion gets me!

Initially, the Knights could choose any decals, but the massive use of coats of arms called for the need for their systematization. There were special people — heralds (heralds), who were responsible for jousting tournaments and making coats of arms. First heralds knew by heart all the arms, but the more coats of arms became, the more difficult it was to do, and soon there was a need to record or catalog information. In this regard, special reference books began to appear, and treatises on the coats of arms.

Coats of arms were considered extremely important attribute of a warrior, family or the state, so their use is strictly controlled. King Edward III of England established a heraldic board (the College of Arms), which operates to this day. In the picture below you can see the facade of the building. 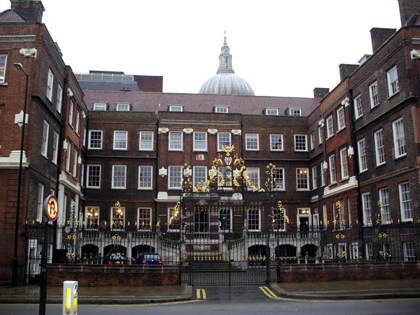 In other European countries also set up similar organizations to monitor the use of stamp characters. From now on, it became impossible to select any image Shield, color, shape, decoration — everything mattered. It was necessary not only to put a symbolic figure in the shield, which at the time was simply because there were even special artists who painted coats of arms. It was also important to prove their kinship (relationship) with the genus, whose name and decals using the man. 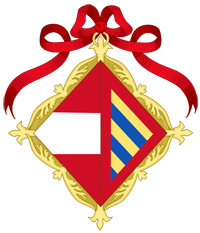 Due to the fact that women are not fighting, they had no right to use a shield, coat, hat or battle slogan. Before marriage, a woman had a right to use the stamp marks of his father, which it is placed on a special board in the form of a rhombus (lozenge). After her marriage to the father added emblem coat of arms of her husband, both located on the same board.

If a woman has a heraldic heir (in the family had no male heirs), the heraldry father of the woman was located in the center of the shield husband. This is called the escutcheon of pretense (conditional heraldic shield).

Coat of Arms Symbolism. The symbolism of emblems

Coats of arms are different in shape, color and symbol on them. Let’s see what some of them mean.

For a complete list of symbols can be found at this site: http://www.fleurdelis.com.

I propose to consider, what does is coat of arms. 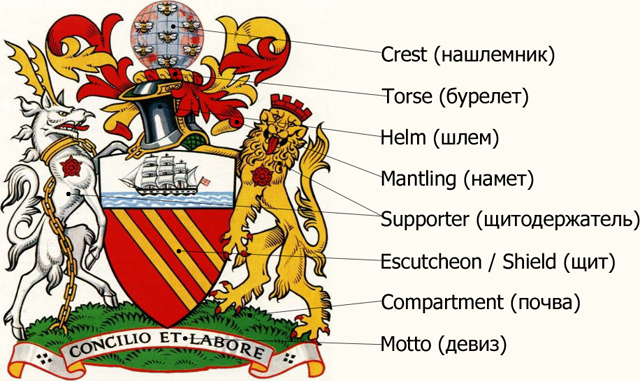 For those who have questions regarding the terminology used in heraldry, the site will be useful for the following: http://www.heraldsnet.org.

Today the great heraldic past fades into the background, and now the coat of arms is greater measure of respectability (respectability), than family history, because already a few are able to read the emblem. Emblems are the countries, cities, universities; private, public and military organizations.

History’s greatest genera and families are depicted in great detail on the arms. If you try to trace the family tree of your family, to find the place where your ancestors were born, it may help to understand where you are and find their place in life. You may be pleasantly surprised, made a mini-study of pedigree. Next, in a fascinating journey through the pages of the history of your family!