Gossip girl or gossip in English 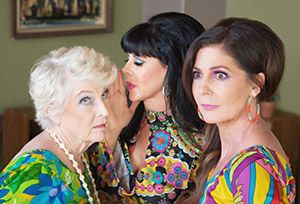 We all know that gossip (to gossip) is not good. It’s ugly and characterizes the person who does it, not the best hand c. Despite this, most people still interested in the changes of bone others (to dish the dirt on smb), and today we will discuss the expression on the subject.

You might be surprised, but the word gossip has not always been negative. At first, this word called godparents (godparents) or close family (familiar acquaintances), who were aware of the family’s affairs. In Shakespeare’s time, the term somewhat changed its meaning. So we began to call people more often than women, who liked to talk about something important. And so we are talking about women who spent time with women in childbirth. Typically, relative or neighbor who talked with the future mother, gave advice, reported the latest news.

As the theme of grace, it is no wonder that the words and phrases that describe the action, quite a lot. Let’s start with the fact that recall the most interesting!

We had not seen each other for ages and spent most of the evening just chewing the fat. — We have not seen and most of the time sharpening fritters.

Unless you have some solid evidence, it’s all just hearsay. — It’s all just rumors, if you have no real evidence.

You are always meddling in other people’s affairs! Do not you understand that it is none of your business? — You’re always thrusting his nose own business. Do not you realize that you are not concerned?

— What did you talk about?
— Oh, nothing of interest. Just idle chit-chatting about this and that.
— What were you talking about?
— Yes, anything interesting. Shabby about that, about this.

I heard through the grapevine that they are going to divorce. — I’m here on the tail brought forty, they divorced.

Every piece of news I get is straight from the horse’s mouth. — Each news that I get from the source.

Prime minister claimed that he had been defamed. — The Prime Minister said that his name was blackened.

Come on! Give me all the juicy details! — Come on, tell me all the details!

The concept of gossip and lying fairly closely intertwined, so if you also want to learn more than the vocabulary on the subject of lies, look for the article «Lie to me: how to lie in the English language.»

And now I propose to read some fixed expressions, which are often used when people talk about a curiosity of some events of his personal life to other people.

Not so long ago, scientists found that such a negative phenomenon as gossip can have a positive influence on people’s lives. For details, see the following video:

At the end I suggest you download a list of words on the subject. I hope you do not often have to gossip, though this list is useful to all!