As I wrote in my first article about the interesting games for preschoolers («Funny educational games for preschoolers. Part 1»), the game helps children faster and easier to learn a foreign language. The game can carry a fairly hard material. But the child perceives it fast enough, because it does not yet know that it is difficult! In addition, it will be much easier to perceive the learning process at school, when the game will end. His brain from childhood accustomed to the association that the study — it is something easy and pleasant!

It’s easy to interest the child watching cartoons in English. Here suitable educational cartoons. At the end of cartoon voiceover asks children, for example, to name the picture, they see or read a word or sentence. Even if you do not have a training cartoon, you can take the process into their own hands, based on the level of knowledge of the baby. For example, you will see the first episode together. You stop and ask the child to name the picture on the screen. If this character, you can ask what they were saying. You can also ask what the child sees on the screen. You can completely beat any situation, the picture or the dialogue! Say that the cartoon will continue after the baby will respond to questions. It is usually a strong enough incentive.

Similarly, you can beat poetry. For example, a child read the following rhyme:

Ask your kid to show these characters.

Here, the child must indicate the named object.

You can also beat poetry and song and even more difficult:

One, two, three, four, five,
Once I caught a fish alive.
Six, seven, eight, nine, ten,
Then I let it go again.

Why did you let it go?
Cause it bit my finger so.
Which finger did it bite?
This little finger on the right.

In this song the child shows through her fingers and shows how he caught the fish, and he released her. Then he asked the question, why did he let her go, but the child shows little finger on his right hand, which if bitten by the fish.

In my photo
You can see
A little dolphin
In the sea!
Look at the fish in my photo, too!
The fish is green,
And the sea is blue!

Here it is necessary to show an imaginary picture, which is floating dolphin. Then, just as well depict fish and the sea, with the help of gestures.

If several kids will be very interesting to beat the popular English song:

«The wheels on the bus go round and round»

Here you can listen to the song and see the perfect example of how children can beat her. If some children can collectively portray the bus and beat this song in motion.

You can make your class is very creative, if you learn to work with applications. For any rhyme or song, you can choose the suitable picture. For example, picture a house:

Open all the windows,
And do not forget the door,
See Mummy, Daddy, Sue and Sam —
And Rover makes one more!

This lodge can be glued on top of the windows and doors. With this application you will be able to learn the command open, close, enter, go out — to open and close doors and windows to enter or exit the house with a toy or just show it fingers. If desired, the application you can think of almost any picture and beat her.

On the table laid out with cards depicting various animals. Leading describes any animal on this diagram below. The task of the child — to tell what kind of animal it is, find a card with her picture and remember the English name of the animal.

Leading lays on a table a few cards depicting various subjects and gives the child a moment to memorize. Then she asks him to turn lead and hides one of the cards. The child must determine exactly what is missing and remember the English name of the missing items. 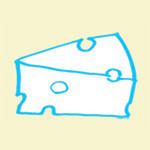 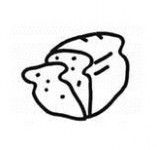 Give the children pictures learned earlier food and beverage. Moderator asks a question, for example:

One of the children who went to the picture of a porridge should raise their hand and respond in English:

Similar questions are asked about other foods or drinks. 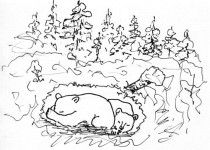 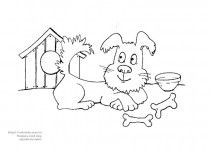 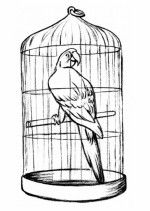 Place on the table with one hand, images of animals and on the other — pictures of their homes (or residences: water, wood, etc.). Moderator asks questions such as:

Where do bears live? [EEE do beez liv] — Where are the bears?

The child has to find pictures of a bear den and then answer this:

Similar questions are asked about other animals.

As you can see, the material can be presented in very different ways. The child will only be grateful and much faster and easier to master the language! Try every time to invent something new, do not forget to repeat already learned. If you do not have time or imagination to invent their own games, they are more than enough in the Internet space. Good luck in the creative process!