In Proceedings By Natalia  4222

Almost all the holidays we give each other flowers (flowers). They are a kind of way of expressing any feelings and emotions in relation to man. Moreover, there is a science — floristry (floristics / flower arrangement), which is engaged in cultivation of different colors and are made ​​up of a variety of compositions. Abroad, Horticulture (gardening) is also very popular. Almost every cottage has its own small garden (garden), in which many grown not only flowers, but many other plants (plants).

Flowers are beautiful and gentle, they are admired, they are presented, and of course, flowers are not only talking about feelings, and they characterize the country where grow. Flowers are inextricably linked to the rites and traditions, they have magical power in fairy tales, but their symbols in heraldry varying powers are not always stored only beautiful memories.

And what a flower comes to mind when you think of the United Kingdom of Great Britain and Northern Ireland? If you read our blog, you probably know that each of the countries it has a flower symbol. 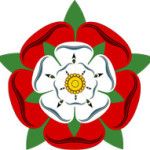 England proud symbol of roses (rose), which preserves the memory of the war, «Roses» 1455-1485gg. In her final two warring kind of Lancaster royal family (their coat of arms was decorated with red rose) and York (the coat of arms of the kind featured white rose) have married their children and put an end to the Thirty Years’ War, uniting the emblem of England scarlet and white roses.

Let’s take a closer look at a rose flower. The English Rose has a special place, it is associated with many idioms. Such a variety of «pink» explained idioms pleasant aroma that emanates from a flower. Idiom to smell the roses — to appreciate what is not usually appreciated, ignored or taken for granted. If you managed to get out of the situation smelling of roses, or smelling like a rose (smelling like a rose), it means that you are out of a delicate situation, preserving his reputation and honor. The phrase to come up roses refer to the situation that has developed in the most favorable way for you. In the same way, if the situation is described as a bed of roses (a bed of roses), it is something easy and comfortable. But, oddly enough, this phrase most often used in a negative meaning: life is no bed of roses (life — it’s not a bed of roses). 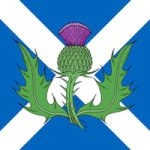 Quite unremarkable burdock, which we know as the thistle (thistle), once helped the Scots asleep when the dark night of the enemy (the legend say about the Vikings or the Romans) was trying to infiltrate their camp. One of the wounded invaders of thistle, screamed and woke the Scots, who repulsed the enemy, because they are not caught off guard. So thistle has become a symbol of Scotland, and it began to print on Scottish coins. 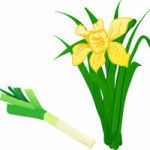 Wales has two floral symbol: leek (leek) and narcissus (daffodil). A strange combination, is not it? It is said that on the night before the battle with the Saxons St. David advised uelstsam attach to helmets leek to distinguish friend from foe. So the battle was won. According to another legend of St. David ate only a few years, leek and bread. Whatever it was, but both symbols of Wales are inextricably linked with this saint. He is revered March 1, the very day when, as believed daffodils bloom. 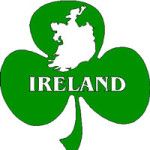 And, of course, everyone knows that silky-leaf clover (shamrock) — symbol of Ireland. According to legend, St. Patrick used trifoliate clover, explaining the unity of Gentiles St. Trinity, which can exist separately, as an indivisible part of the whole. The shamrock has become a symbol of one of the most popular holidays of Ireland — St. Patrick’s Day. Many people confuse the four-leaf clover and shamrock, but it’s different plants and symbolize different things. Thus, the four-leaf clover — a symbol of good luck and prosperity, and trifoliate leaf clover — a symbol of Christianity in Ireland.

And now I invite all those who are interested to know more about the colors, to get acquainted with the basic elements of the structure of the flower in English. 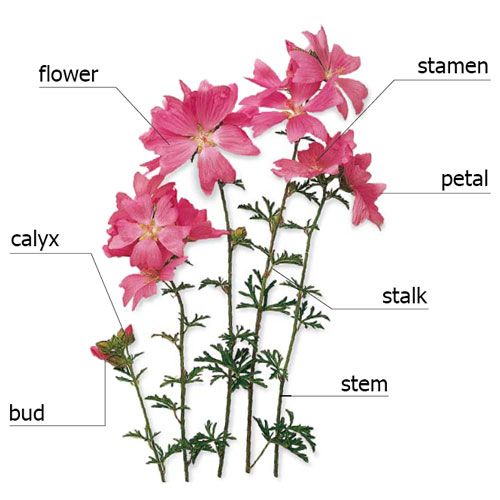 Let’s now look at a flower in a cut — a little trip back in time for a lesson in the school of botany. 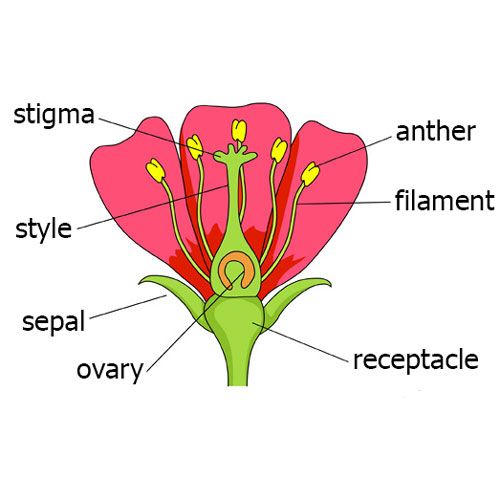 I suggest to get acquainted with the names of colors. Write in your notebook, teach them, and do not forget to use the learned words in the speech.

We also offer a full table with the names of colors in English.

Flowers in English we have listed. Now mention the accompanying vocabulary. Of the various kinds of flowers make bouquets (bouquet) and ikebana (ikebana). In order to grow a flower, it is necessary to put (plant), then fertilize (fertilize / dress / enrich / hearten / nourish) and water (water), as well as in every possible way to take care of him. With proper care, the flower begins to bloom (bloom / blossom). If we are talking about indoor plants, you can use the word pot flowers.
Well, now safely go to the flower shop to buy flowers and give them to someone you know! Check how well you have learned their names.