Flat adverbs. Adverbs, coinciding with the adjectives in the English language

People studying English dialects are constantly faced with, even if they are just starting out in learning English. We’ve already covered the topic of adverbs in the article «Speech in the English language», which determined their value in the speech, familiarized with the categories and degrees of comparison. Today, we will answer very burning question for those who are enthusiastically learning English and is tormented by doubts: how to drive slow or drive slowly?

We know that the adjective defines the noun or pronoun. For example, in the sentence «It’s a wide road» word wide — adjective, a noun that defines the road. A couple more examples of adjectives:

We hoped for equal time to finish the test. — We were hoping for the same for all time to complete the test. (adjective equal)

Adverb, in turn, defines a verb, adjective, adverb, or other. Very often adverbs ending in — ly. They are formed by means of appropriate adjectives by adding — ly.

What is a flat adverbs? 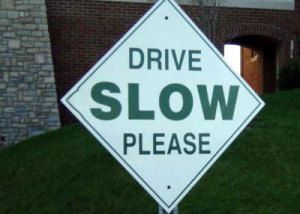 Have you ever paid attention to the phrase Drive slow, which can be seen on some road signs abroad? Is it correct? Indeed, in this case, we need a word that defines the action, not the subject. It would be logical to say Drive slowly. But the first option is also not an error, because this type of adverbs, which is called in the English flat adverb.

Flat adverbs, they also bare adverbs or adverbs without a grammatical indicator — a dialect, the shape of which coincides with the appropriate adjectives. Some of them: clean, close, deep, early, far, fast, fine, hard, high, long, low, near, quick, slow, straight and so forth.

Let’s look at the most common examples of flat adverbs with translations.

In everyday life we encounter such adverbs often: drive safe, take it easy, go slow. Moreover, before they had even more popularity, and in the XVIII century grammarians did not consider flat adverbs adverbs. They were conventional adjectives! In the Middle Ages such adverbs had case endings, that distinguished them from the corresponding adjectives. However, over time they were replaced by modern man accustomed to dialect — ly.

Here are a few examples taken from the classics: even in 1719, Daniel Defoe wrote in his immortal «Robinson Crusoe»: «… the weather was so violent hot …». Samuel Pepys, the author of the popular diary of the daily life of Londoners times Styuartovskoy restoration, wrote in 1667: «… I was horrid angry …». Today, not all dare to say so, because it sounds strange when — ly cut off.

And now let’s look at the examples in the video, recorded by native speakers. The author of the video is the assistant editor of the authoritative edition of the Merriam-Webster, Inc. — A subsidiary of Encyclopædia Britannica, Inc.

At the beginning of this article, we doubt whether it is possible to speak drive slow? Of course you can! And we can say drive slowly. For flat adverbs — a kind of adverbs. Just make sure you are using genuine dialect of this type does not exclude — ly in those dialects where it is needed. I wish you all good luck and inspiration to learn English!