Each country has its own national symbols — the coat of arms, anthem, flag, seal, motto, the standard of the President, the flowers. It is established by the Constitution and the special law a special, historically, decals particular state, which represent its sovereignty and identity. We’ll talk about the flag — banner of regular geometric shape having any special coloring.

English flag is known to everyone, even the person who does not learn English and could not connected with him. Who is the English flag, and why this image is selected for the UK?

In the English flag is a very rich history. Her description is not our goal at the moment, we only touch on the graphical content of the national symbol of England. If you’re wondering who and what influenced the creation of the modern version of the flag, read the material resource flags. ru. He will give you all the answers.

English flag, also known as «Union Jack», is the national flag of the United Kingdom of Great Britain and Northern Ireland. It sounds like that the official name of England. Since it consists of England, Scotland and Ireland, therefore, the combination of stripes and colors should reflect these three states. 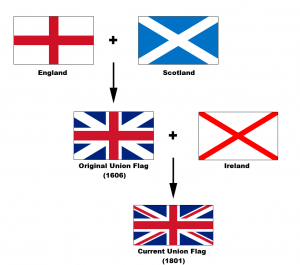 Thus, in the British flag includes: