It’s no secret that the beautiful English literate it is based not only on the correct use of grammar rules and features of word, but also qualitatively pronunciation. As in any other language, there are rules in the English reading and pronunciation of certain letter combinations. But at the same time, English is famous for its volume of excluded words that are pronounced in a certain way.

Moreover, in recent years we have seen a tendency to a certain «liberties» with the pronunciation: many words there are two and sometimes three variants of pronunciation, which, being enshrined in the dictionaries, are the norm. In this case, you are free to choose which version of a particular word you read closer. For example, 15 years ago, the word often read only in this way — / ɒf.ən /. The pronunciation of the word as / ɒf.tən / was considered a blunder. Now these two pronunciations (British and American) are absolutely acceptable language.

Even studying English for years, there is always a «chance» to meet the word, the pronunciation of which is questionable. Of course you can try to read it on the basis of the existing laws in the reading. But, to be completely sure of its correct pronunciation, you still look in the dictionary. For example, the word colonel — Colonel. Attempts to read it as ko-lo-nel will not succeed, because the pronunciation of the word — / kɜː.nəl /. Therefore, all students of English is strongly recommended to have one of the tabs online dictionary and use it as a reference book. These dictionaries are:

In addition to the exclusions in the reading of certain combinations of words, and in general, in the English language there is another «pleasant» nuance. Some cognates are different parts of speech, to be read in different ways because of different setting accents. Consequently, certain syllables reading will also change as the syllable unstressed which was a single word will impact the other and vice versa. For example, here are the words:

And here is a wonderful dialogue with them is from the book «How now, brown cow?» (A course in the pronunciation of English, with exercises and dialogues by Mimi Ponsonby):

Diana: What have you decided to do after college, Jeremy?

Jeremy: I’m going to take up photography. Mr. McKenzie’s recommended the course at the Institute. He believes I could make a career as a photographer.

Diana: You’ll have to develop your own photographs. That requires technical skill. Jeremy, you’re not a technician! And photographic materials are very expensive.

Jeremy: Well, Diana, Mr. McKenzie thinks there’s a possibility I might win the Observer competition. I sent in four entries. All the competitors are amateurs, like myself.

Diana: I detest competitions. I never agree with the decision of the judges! I’m going to be a politician. I shall become the most distinguished woman on the political scene!

Jeremy: I thought you hated competing! Do not tell me politics is not competitive!

The Internet is made up more than a list of words, with pronunciation problems that the majority of English language learners. I would like to introduce you to the most interesting items (the correct pronunciation in transcription next to the word):

Particular difficulties in pronunciation as the word cause, having in its composition silent letters are not read. For example:

And, of course, it is not easy to cope with the reading of words, consisting of several syllables. Very often, in these words besides the main emphasis has also secondary. It is denoted below as opposed to master. Long words in the English language a lot. To teach them how to read, it is necessary to say a few times. Practice reading these words:

To appreciate the complexity of the pronunciation of certain English words, I suggest you try your hand at reading the famous poem «Dearest creature in creation …», difficulties arise which absolutely all English language learners regardless of their level. The full version of the poem can be downloaded here. I also suggest you to record 2 with a part of the poem written by teachers who are native speakers of our school. After listening to the recording, you can once again see how very different American pronunciation (teacher Scott) from the British (teacher Dave): 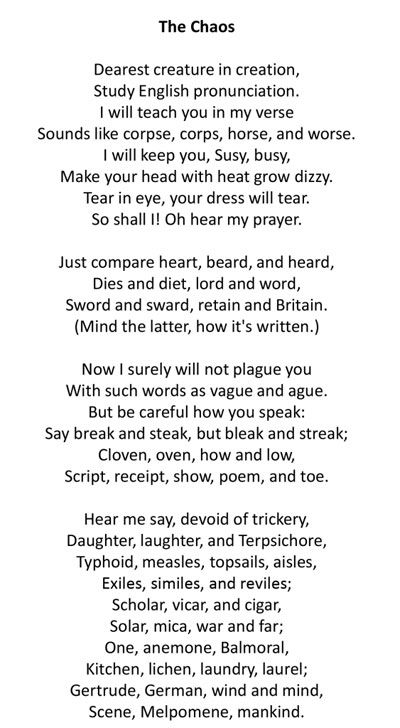 The problem of pronunciation and reading in English is quite important. And, of course, the World Wide Web has a lot of resources, which give it special attention. Among these resources, I would like to highlight:

Opportunities to monitor and improve your pronunciation a lot. Resources to help you more deeply and thoroughly study this topic is also enough. The main thing — the desire to have a beautiful sound and a lot of patience on the way to the goal! Wish you luck!